It took us 2 weekends, almost 6 days to complete this trail. The first weekend arrived late Friday afternoon on the beach, still enough time to check out a smaller waterfall and pool in the Sertão do Cambury rainforest. The next day, having reached the first waterfall (Cachoeira da Pedra Lisa), we ran into a rainforest trail that lead us in a complete different direction, back to Cambury .

When we returned, we finally picked a promising trail, heading into the right direction, but I suppose this was a hunting trail, that became smaller and smaller, time was running out, so at 400 height meters we returned to the campsite in Boiçucanga.

On  Sunday we headed up to the fourth waterfall, where most tourists stop and I remember that I was a little bit concerned because some assaults on tourists had been reported there, recently. The normal trail ends there and it took me quite some time to find a continuation. The tricky thing is, that you have to walk up some hundred meters through the river, which from the fourth waterfall on is fortunately pretty shallow. Somewhen on the left side you have to enter the woods and find a small trail that follows the Itu river upstream. Again time ran out, it was 2 pm and we still had to return to SP.

Two weekends later, the idea was to find the upper trailhead from the Rio Pardo sand road, so we left SP early, headed to Salesópolis where this road starts. From Salesópolis it is about 70 km to the shore, the road is pretty ugly and even with a 4×4 vehicle it takes hours to reach Caraguatatuba. I had no GPS point or any other concrete description, where the trailhead might be, just a notion where the Itu valley more or less is located. We probably wouldn´t have found it, if there wouldn´t have been some road workers who gave us some hints because they remembered having seen some people entering this trail some weeks ago.

So we returned very slowly with the car in direction to Salesópolis and searched very carefully for a trail entrance on the left side which we finally spotted about two hours from sunset. We still benefited from the remaining sunlight to descend the trail until an abandoned porperty where until some years an eremite was living. From there we returned to the car, continued to Porto Novo / Caraguatatuba and reached the campsite in Boiçucanga at about 10 pm.

The next day should be the day. We stand up early, reached the fourth waterfall at 10 pm and continued the trail I had spotted the other weekend. The main difficulty of this trail is that you have to cross 8 times the Itu river but don´t know when. So you constantly pass the crossing location, continue into Nirvana until figuring out that you are wrong. Than you have to go back, search for a location where you can cross the river and search for the continuation of the trail on the other side. So forth and back you have 16 river crossings and it somewhen becomes a little nasty and consumes a lot of time to always put off and on your shoes, so somewhen you just don´t do it any longer.

Well, we reached the eremite´s place at about 2:30 pm and it was good that we had descended the last part of this trail the afternoon before, because it was summer, sunset was at about 5:30 pm and we just wouldn´t have had sufficient time to complete the whole trail as a roundtrip in one day. 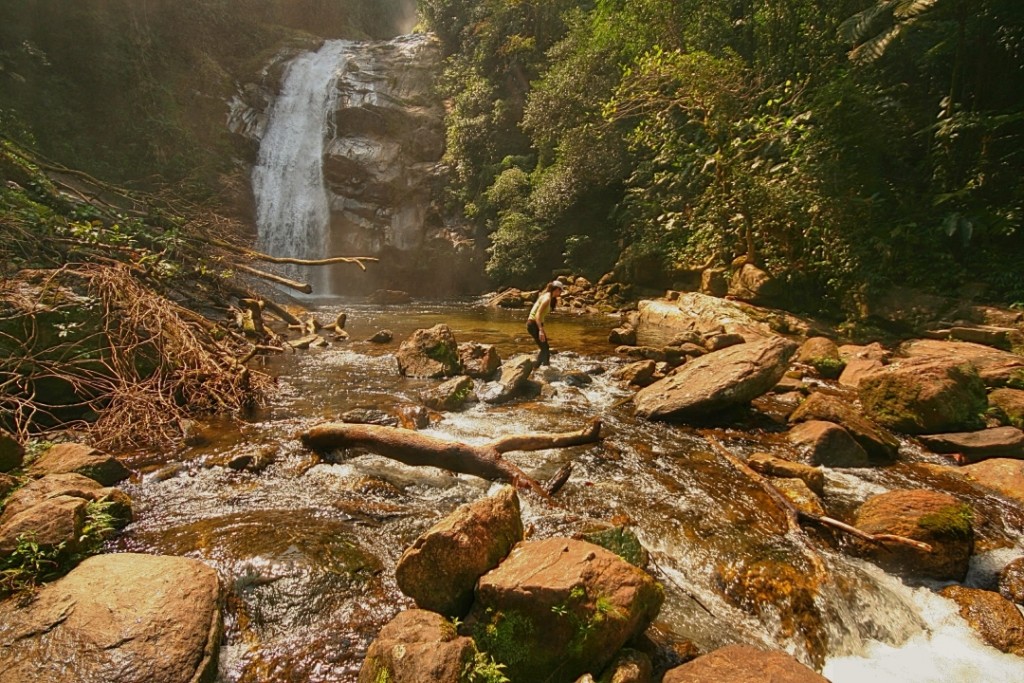 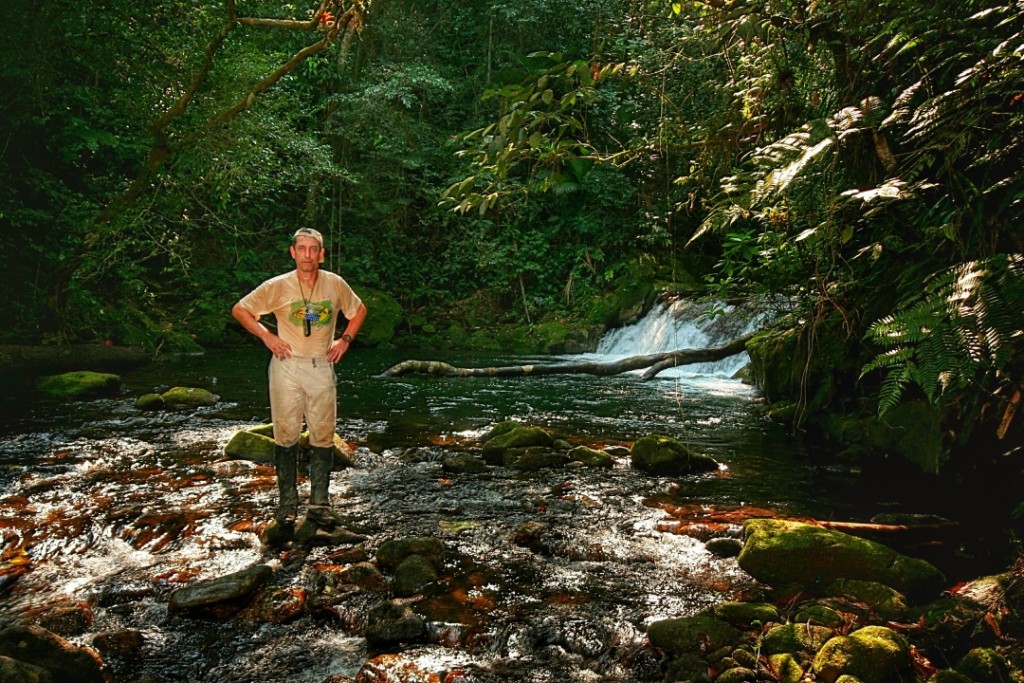 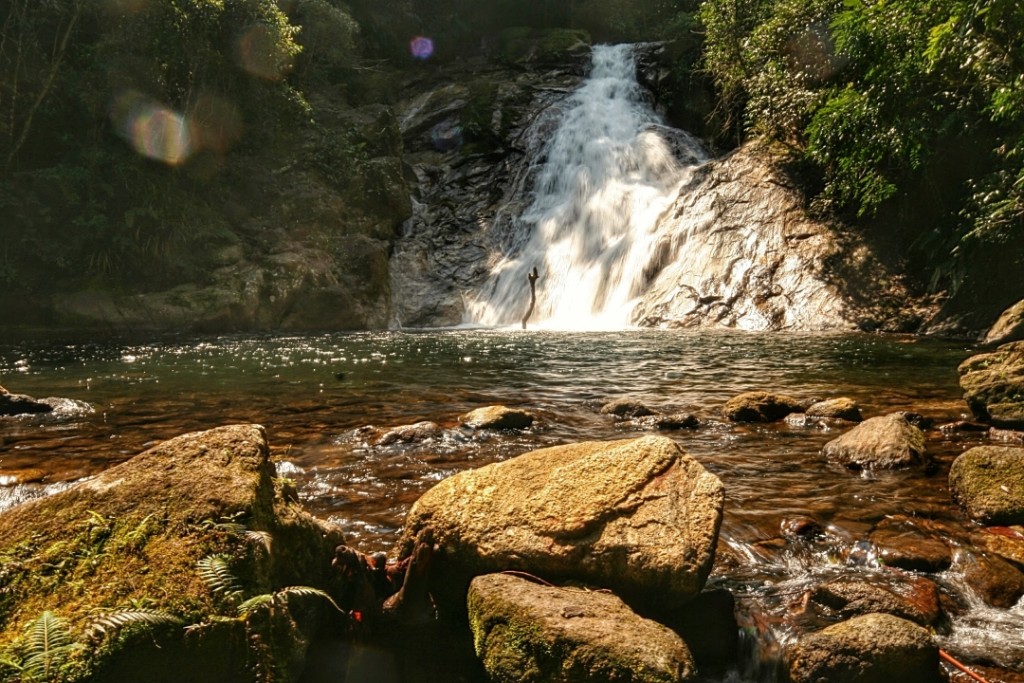 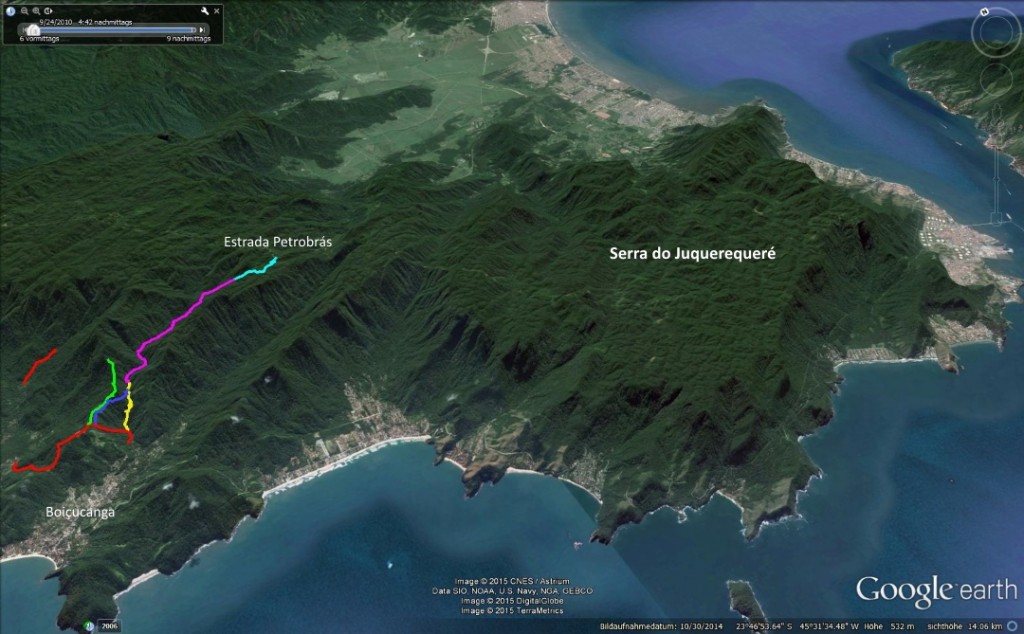