Paraná, August 2013 – Sebuí is a private Mata Atlântica reserve, adjacent to Superagüi National Park, in the so-called Lagamar Complex (Paraná north coast). It can be acessed from Guaraqueçaba by boat. One of the owners, Italian descendent João Amadeu, fisherman and owner of a guest house is the only one who conducts hiking tours and expeditions in this region.

Typically he takes tourist to the reserve to show them 3 of the 4 waterfalls in the lower part, which is a very nice program because aside from a walk through pristine lowland and submontane rainforest, it comes together with a beautiful boat tour through the mangrove forests. But there is also a long loop hike to the top of Sebuí, at about 400 height meters, which even João maybe has completed not more than 8 – 10 times in his life, three of them with me.

The problem with this tour is that you have only a limited time window available because of the tides. You can´t leave Guaraqueçaba too early because there might not be sufficent water yet, to come close enough with the boat to the trailhead and you can´t be too late back because than the water has vanished and the boat is sitting on the seafloor. Even when you achieve to mobolize the boat, get out of the small mangroove channels and reach the wide open waterspaces of the Lagamar, the engine most probably will constantly run on ground because of the shallow low tide waters (as happened when I did this tour with an Audi collegue, 9 years ago). And of course the tides change with the moon, so many times you can´t do this hike at all because the time window should be during daytime.

The last time, I have been to Sebuí was 2013, in late August, with my German friend Dieter. It was not really planned to go there but we had to give up at Pico Paraná due to bad weather, spent some time in Marumbi and when Dieter told me that he had never seen mangrove forests in his life (probably the only thing, he has not seen so far), it became pretty much clear to me that a visit to Sebuí would be indispensable.

I hadn´t seen João for many years and was afraid he would either not be there or without time for us because of his other obligations but he was there, really didn´t have time but I would say as a courtesy to me for the many adventures we had together, even with a damaged knee he made this tour possible for the overnext day.

We left Guaraquecaba at 05:45 am reached Sebuí at 06:30, fixed the boat and started moving towards the waterfalls. The fourth one we passed at about 07:45 when the punk started. Due to strong winds dozens of large trees had fallen on the ground and made it impossible to stay on the trail which anyhow is more an idea than a real trail.

As João was the only one with a knife, we moved very slowly, trailless, guided by Joas memories but at about 09:00 am it became pretty clear to me that Joao had no f…..g idea any longer where we were. Dieter didn´t seem to be worried at all, he was taking pictures.

But than João impressed me quite a bit. Because to me everything looked pretty much the same and I still have no clue how he managed to bring us back on track again. He went forth and back and back and forth, changed 2 times his opinion and than suddenly remembered some topography and even found the trail.

Meanwhile it was 11:00 am, we were still moving pretty slow because the trail was pretty closed which is normal when there is no traffic, when João suddenly asked me to take over his knife. In the first moment I didn´t have too many thoughts about that, beside a little bit of pride that João handed me over his knife but later I understood that these were already first signs of exhaustment.

Anyway, I took the knife, cut whatever came into my way, bamboo flying left and right, to the amusement of Dieter and João behind me. But we had a good pace now and reached the upper part of Sebuí which is easy to recognize because of the many enormous rocks, sometimes forming large caves. In principle a perfect place to stay a night , but not this time.

The second time I clearly perceived that João was tired (or suffering from his knee) was when he suddenly said; ok now that we have reached the top, let us go down. First I thought this was a bad joke because the main reason to come up here was to climb the only rock, (I don´t know how João somewhen had discovered it) from where there is a spectacular, all efforts compensating view.

So I strongly protested and said, no way, we want to climb this rock. I guess João recognized immediately that I was damn serious so he continued in direction to the rock and asked me to go ahead to clear the way, because he was slower. In reality it was not only that he was tired, but as he is experienced enough, he was already concerned with our time left because we had spent a lot of it when we were lost and when clearing the trail.

So I hurried in front, cleared the trail, got lost, waited for the others, continued, finally found the rock and suddenly the magic moment was only seconds away. It was 01:00 pm when we climbed this viewpoint which is only possible because there is a tree close where we could secure ourselves. Even though, Dieter had to help me and João with his hands and shoulders, in order to be able to get up.

The sensation you have when you get up there is indiscribable. It is a little as if you have dived for hours without having seen anything else than dark rainforest and than suddenly put your head out of the water and a jaguar offers you his hand, saying welcome to Paradise.

Weather was terrific, it is a 360 degree view and you can literally see everything; Ilha do Cardoso, Praia Deserta, the Varadouro channel that separates Superagüi from the mainland, Ilha das Pecas, Guaraquecaba, Paranagua in the distance, simply everything.

And as always, what makes these moments so magic, different from when you go on your terrace and have a nice view or go up the mountains with a cable car, is this exclusivity. Few have been to these places, it is anything other than easy to get there and time is limited. We stayed there for about 20 minutes, than we had to get move again. I was still so excited that I lost my sunglasses, found them again and 2 minuts later lost them again, unbelievable.

At that time, we were already late but in our minds we were calculating that the trail for the descent would be much better than during ascent. We were prooved wrong. Maybe it was even worse, again dozens of trees on the ground making it difficult to advance and this time we lost the trail definitely. Wed descended in direction to the undergoing sun, which according to João would be the right direction. In my view it was way too much east.

It was 03:00 pm, we were in the middle of the descent, at about 300 hm and when I looked on my GPS (which fortunately I brought with me) where we were and where our boat was, I wanted to cry. I didn´t say anything to Dieter. It was the first time that I prepared myself mentally for staying the night in the rainforest.

At about 04:30 we finally reached sea level. The good news was that we found a broader trail, the bad news was that João had no idea which kind of trail that might have been. Later he figured out that this might be the so-called Master Trail, a kind of long distance path that leads to Rio dos Patos and to Ariri on the SP – Paraná state border. We had to chose a direction and João decided to turn east, opposite from where our boat was, which was when I broke a rule, I normally don´t break, interfere in the decisions of the responible guide.

Of course, in the rainforest a trail that turns east the next moment might make a u – turn and goes west, you never know but based on the informations we had, west was really more plausible. So, after a long discussion, João finally agreed to try west which was the right decision.

From there on the trail was clearly marked, flat terrain but what made me crazy was that João, in front of Dieter and me walked so slow, despite that there was almost sunset. I guess, I didn´t want to realize that João was walking at his physical limits.

It was 05:45 pm when we finally were close to the place we had been this morning, relatively close to the boat which was when I had my next discussion with João. There was a river left of us, easy to cross and on the other side, according to the GPS was the trail from this morning. So for me, I would have crossed there, get on the trail we know and head to the boat but João insisted to continue on the trail we were because he believed that furter beyond there would be even a better way to cross the river. This time I let him decide which turned out to be a mistake.

It was 06:00 pm when we reached the place João had referred to. The good news was that against all expectations the water was still high, so probably the boat would still be floating. The bad news was that it was way too deep to cross there. João asked me if we would mind to swim, and I responded him, no way because I had a digital camera and 3 lens in my backpack. So he asked us to wait there, he would go for the boat. It was dark meanwhile. Dieter and me waited there for about 20 minutes eaten alive by the mosquitos when we suddenly heard a boat coming closer (with a paddle). It was João, telling us that it took him a little longer because he had fallen in a sinkhole, his backpack was wet and his camera destroyed.

We also found out that João didn´t have a light. Fortunately Dieter and me had, because if not it wouldn´t have been possible to prepare the diesel oil mixture for the tank, neiter fill the tank, nor get out of the small mangroove arms. After having prepared the boat, I took a seat in boat´s frontpart trying to illuminate our way out of the mangroove arms, while Dieter was balancing the boat from the back.

We reached Guaraquecaba at about 08:30 pm when João´s sun called off the military police who had started to initiate the rescue operation. 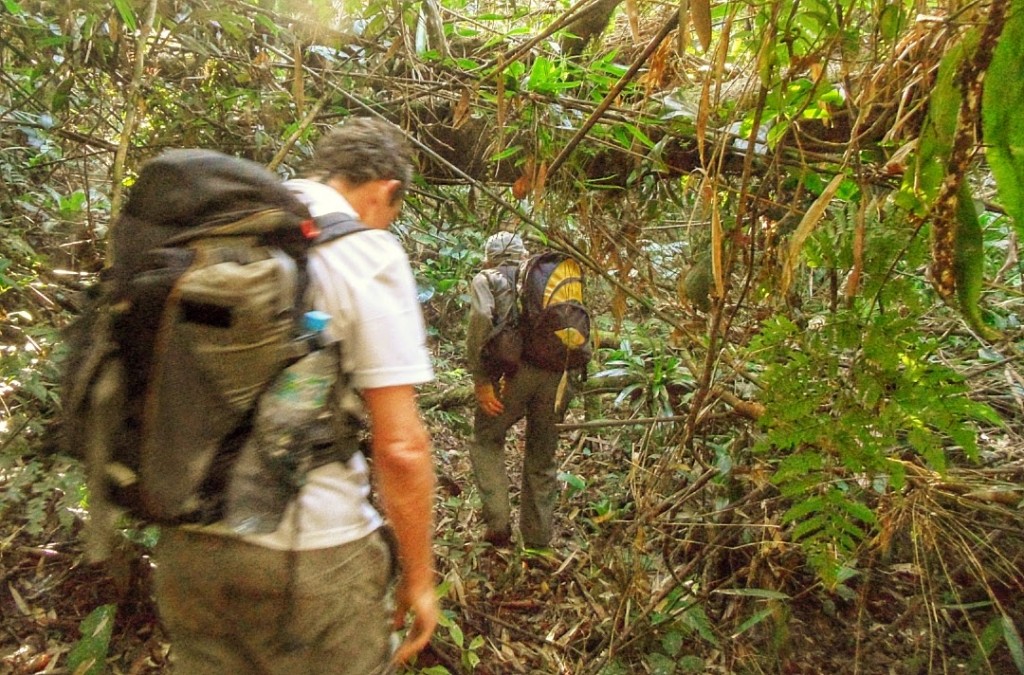 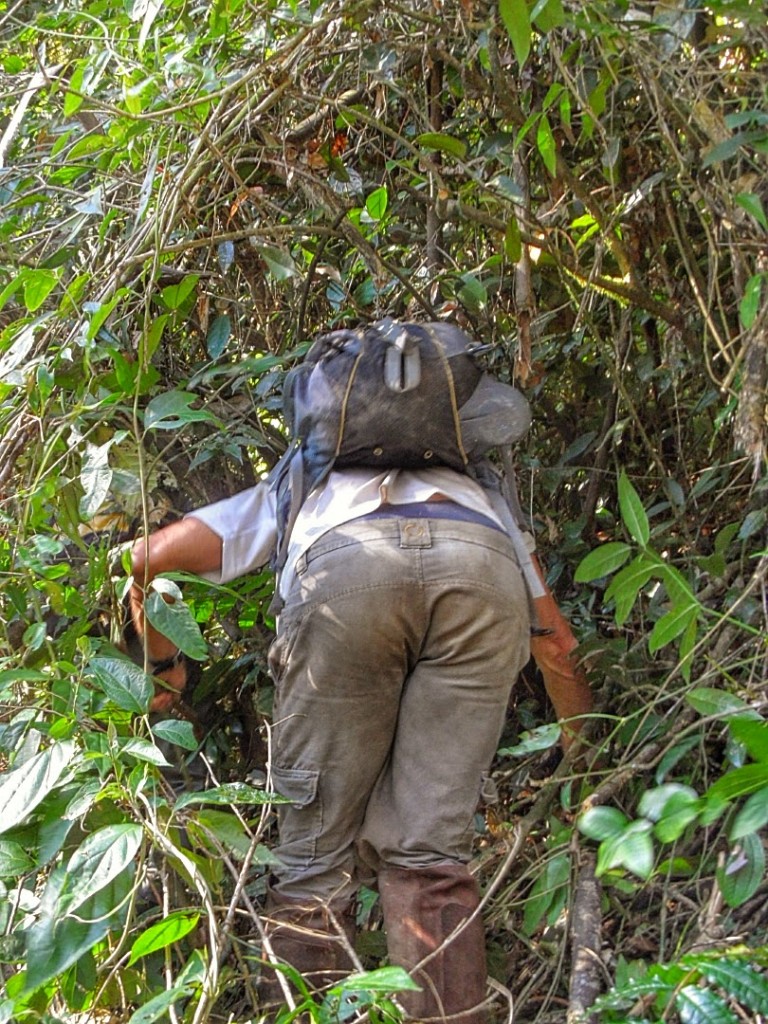 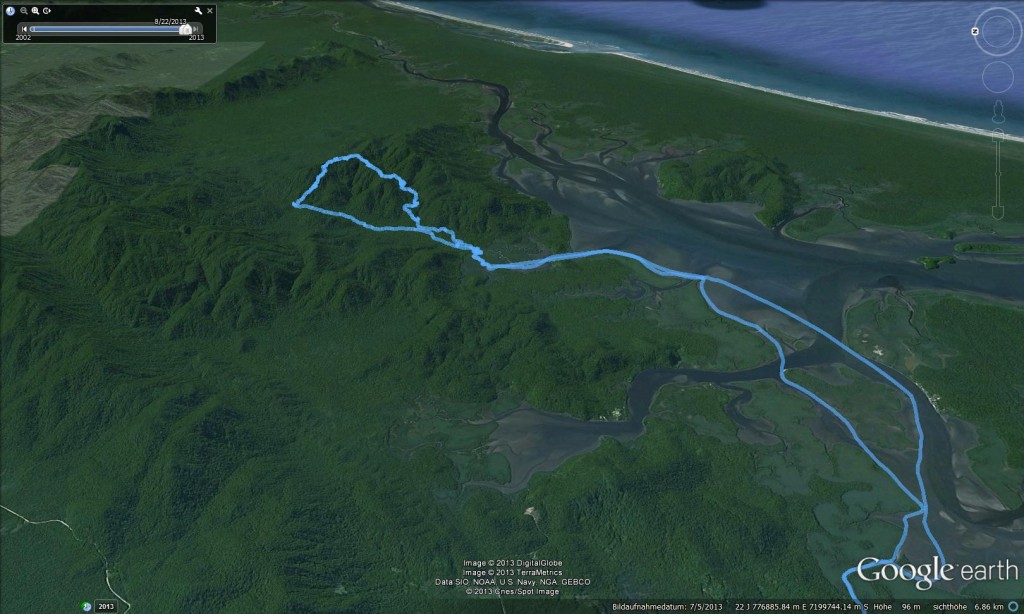