Ilhabela, December 2012 – The Paquera valley is located in the centerwest of Ilhabela (SP) and can be acessed from three different locations; Itaquanduva, Perequê or Cocaia. There are visible trails up to 300 height meters, where the Quilombo do Bananal fall is located, apparently a location where in former times African slaves tried to hide from their Portuguese oppressors. Few people know this place.

Beyond the waterfall the trail becomes less visible, with several interruptions, some hunting bases, until reaching a rock formation at about 600 height meters, where it is possible to put up a tent or two. From 600 hm onwards no further trails are available.

Paquera gives access to Baepi (1.048 m), Tocas (1.079 m) and after reaching a saddle at about 900 hm, to Ponte Alta (1.259 m) and the Poço valley in the northeast.of the island. In order to reach these places, a lot of patience, discipline and several days of explorirng and pathfinding are required.

To get up Baepi (the real Baepi, according to IBGE topographic map, not the granitic rock formation, further west, which can be acessed by a touristic trail) it took me three days, The first attempt seemed already pretty promising, with a beautiful montane climax rainforest between 500 and 800 height meters but than suddenly the terrain becomes extremely steep and dozens of large trees that had crashed because of their weight in combination with storms, hinder the advance. Finally a large slippery rock plate below the crest, which fortunately I was smart enough not to climb, forced me to retreat. The second time I discovered a route east of the the rock plate but had to return because of time. The third time I finally made it to the summit even if it took me almost 2 hours for the last 600 meters or so because of dense bamboo forest that covers the crest. Fortunately there was one spot, a little below the summit, where the rainforest opened a little to get a nice photo shot.

The first attempt of Tocas was not really planned. On the search for a passage towards Poço I suddenly ran into hunters and their dogs. In reality I only heard the dogs barking appr. 100 meters in front of me. I waited some time, hoping the hunter (s) would show up in order to talk to them friendly but neither them or their dogs appeared. So I decided to retreat in order to avoid trouble. As the day was young I crossed the Paquera river further below and went straight up to the summit. Similar to Baepi on the other side, at about 900 hm dense bamboo forest forced me to give up. The other day I chose a different route, from about 300 hm directly to the crest, where to my surprise i ran into a hunting trail that led to a beautiful rock formation with splendid 360 degree views, about 1 km from Tocas peak.

Finally, Ponte Alta I tried with a friend of mine last year but we couldn´t make it. The first day we ran into bad weather and wet and cold were forced to put up our tents at the 600 hm rock formation cited above. The next day we advanced very slowly because of the terrain and also because we lost a lot of time with flagging. Even though we achieved to cross the saddle, continued climbing and reached the foot of Ponte Alta at abou 4 pm. If we would have taken our tent with us we probably would have stayed the night and tried the final ascent the next day but we didn´t and also Dieter had to return to Germany the next days, so I didn´t want to push the risk level any further.

On our way back to the tent a severe accident happened. I spotted a potentially interesting waterfall to our left and as we anyhow were going to spend one more night at the rock formation, I could convince Dieter to try an approach. The idea was to reach the river below the fall and than walk it up. In order to reach the river bed we had to overcome some 10 height meters or so when it happened. I think I was already a little tired, unconcentrated, moving pretty fast and also with a lot of bad luck. While trying to get into the river bed I secured myself on 2 trees, one of them a little rotten, so it broke. When I fall backwards, because of my weight the second one also broke and I had a 2 to 3 seconds backward freefall, crashing on a large granite in the river bed. Dieter still tells me that this was the moment to die or at least have broken something. Fortunately I kept my head upwards and also the backpack lindered a little bit the impact. Even though the crash was so strong that I had to stay for about 15 minutes on the ground because each time I tried to stand up I lost conscience. Since them I decided not to move any longer alone in these forests. The risks involved are simply to high.

Somewhen I would like to reach Poço beach on the other side, via the Paquera and Poço valley. Formerly African slaves landed on Poço beach and I am sure that they used this route in order to reach places which are nowadays Perequê or Barra Velha. 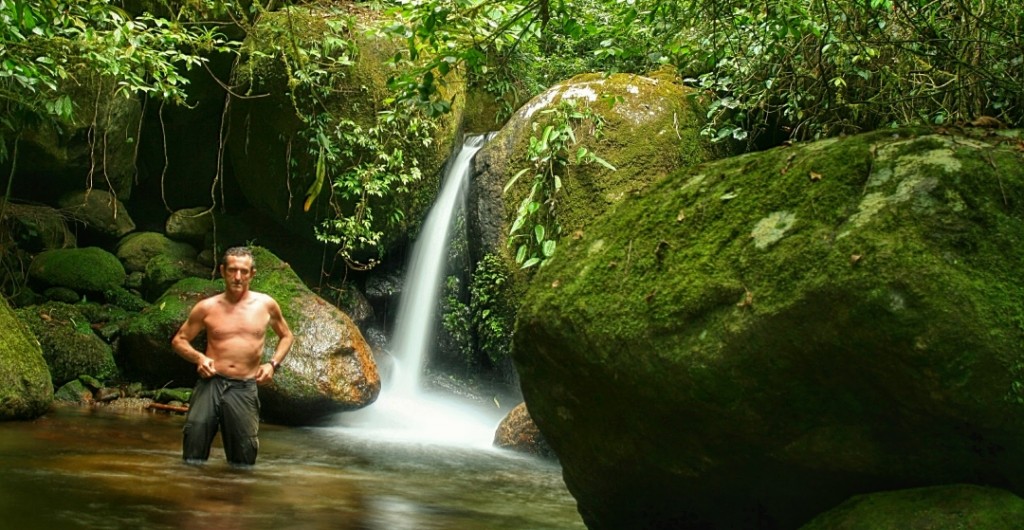 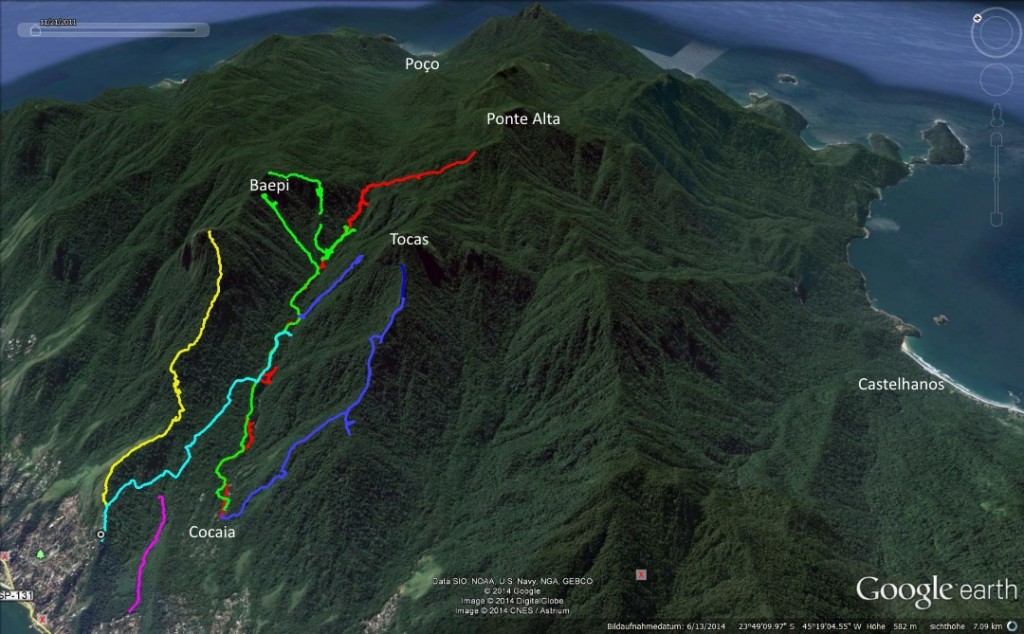